The Seiko Alpinist is a collector's favorite when it comes to sub 600$ timepieces. You simply can't go wrong by adding a model from this lineup to your collection.

If you're still unsure about which model from the range you should get, I suggest you take a good look at the SARB017. This review will give you everything you need to know about this model, so you can know if it is the right timepiece for you.

The Seiko SARB017 has a really nice size for a dress watch. With its 39.5 x 12mm case, it will fit nicely on men with smaller to medium wrists. The 39.5mm number can be a bit deceiving, when looking at the 46.3mm lug-to-lug width. On your wrist, this watch will actually look like a 37mm watch, such as the Seiko 5.

The 20mm band is quite common for watches in this range, so you won't have any problem finding a replacement band if you plan on personalizing your timepiece.

The brown leather  crocodile-patterned strap that comes from the factory is beautiful. The problem that is most often associated with this strap is its rigidness.

Of course, every leather strap will be stiff at first, until the material has ''broken-in''. But this particular band seems to stay quite stiff throughout its life. While it's not that bad, the strap is definitely a let down compared to how awesome the watch actually is.

Fortunately, you can easily remedy this problem by buying a third-party strap. Throughout this article, you'll find a few examples of good looking combos that you might want to replicate.

The Alpinist’s crystal is made of synthetic sapphire, which is quite common for mid-high range Seiko watches. It will be plenty resistant to scratches, and a bit more shock resistant than traditional sapphire glass.

While the Alpinist line isn’t marketed as a diving watch, it still offers 200m water resistance, which is much more than other pieces in the same category.

In the last few decades, watch enthusiasts came to expect very high quality stainless steel parts from Seiko, and the Alpinist is no exception to this rule. The deep brushing on the lugs, the polished bezel and flawless beveling on the case back give the piece an exquisite finish.

Source: Watches You Can Afford

The two crown setup gives the Seiko Alpinist a nice distinctive style. It shows that the watch is sophisticated and has multiple features. The 3 o’clock signed crown is used to set the hour and date. The 4 o’clock one can be used bi-directionally to operate the inner ring, which serves as a compass.

A small negative aspect is that the compass crown isn’t screw-down. This means you might move it a bit unintentionally, which can make you lose true north. The 3 o’clock crown has a screw-down mechanism, which helps the timepiece achieve a 200m water-resistance.

The 6R15 japanese automatic movement is definitely the greatest selling point for the Alpinist line. This movement is marketed by Seiko as an upgraded version of the famous 7S26 caliber. The improvements are numerous, but the biggest is the hand-winding.

On entry level Seiko equipped with the 7S26, you can’t wind the movement manually, which means you need to shake it for a good minute when it runs out of juice. The 6R15 equipped models give you the best of both world: automatic with the possibility to hand-wind. Also, you get hacking (seconds-hand alt)

The accuracy of the 6R15 is expected to stay within a range of +25 to -15 seconds per day, which is quite accurate for mechanical movements in this price range. Some higher end watches have a more accurate movement, but they often compromise by offering a smaller power reserve.

Other famous Seiko watches that use the same movement include the Prospex and the Sumo lines.

The bezel on the SARB017 is understated and beautiful. Since it is not a diving watch, the bezel is stationary, and has no markings. Personally, I would have liked a small pattern along the circumference of the bezel, like the one on the Orient Mako II.

The purists will love the plain bezel as it is, others will mod their SARB017's bezel to fit their taste. No matter what you do with this watch, it is very hard to make it look bad.

The dial is really what makes the Seiko SARB017 such a classic timepiece. The green color is pretty rare to see on watch dials these days. Watchmakers often choose more ubiquitous colors such as blue, white or black.

The few models that use a green dial often choose a darker khaki green, which is a very conservative color. Seiko decided to separate itself from these models by offering a luminous, light green, and the result is marvelous.

You get an astounding timepiece that will change in tone depending on how the light hits it. Depending on the brightness, the dial can go from very dark to light green.

The gold-tone hands and numeral pair incredibly well with the aforementioned green dial. They really stick out and give a luxurious style to the piece.

On the outer ring of the dial, you get about 340 markings that can be used as a compass. If you don’t quite know how to use an inner dial compass, I strongly suggest watching this great video by Long Island Watch. 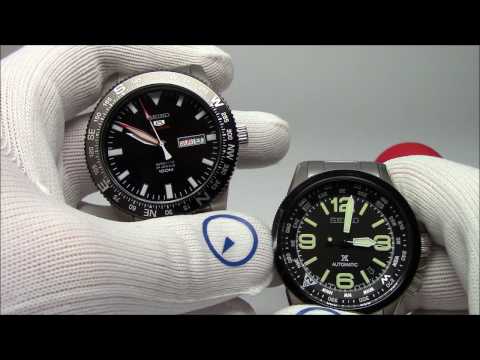 The three hands featured on the SARB017 are really beautiful, and they are often referred to as cathedral hands. They have a very elegant styling that pays homage to horology traditions. As is the case for most Seiko models, the hands are draped in a thick coat of luminous phosphorescent, which helps read the time when it's dark.

Source: Watches You Can Afford

At the bottom of the dial, there are three text elements displayed in a white font. The ‘’Automatic’’ label is written in calligraphy, and it’s there to let people know you have a classic timepiece. Below it, you can find the ‘’Diashock 23 jewels’’ tag.

Diashock is Seiko’s shock absorption technology, which is used to reduce friction between the jewels and the movement components. The Diashock technology was introduced in 1956 on the Seiko Marvel.

Finally, the last piece of text states ‘’20 bar’’, which refers to the water resistance.  The case back displays pretty much the same information, with the addition of a nice mountain pictogram with the Alpinist logo.

While there are several watches in the Seiko Alpinist line, there are two other models that have the same exact layout as the SARB017 except for the dial color.

The SARB013 is a magnificent variation of the Alpinist lineup. This model uses the same golden traits as the SARB017, but the dial's color is replaced by a delightful creme color. Apart from that, the main difference is the bracelet, which comes standard in stainless steel on this model.

Unfortunately, the SARB013 isn't in production anymore, and you can't buy it new from online retailers. Your best luck is to go through eBay or Craigslist to find a pre-owned example.

Since it was part of a limited production, this model continues to go up in value with the years, and a mint condition SARB013 may go for upwards of $1000.

The SPB089 isn't as beautiful as the other two models in my opinion, but all tastes are in nature. The blue dial will appeal to a broader crowd, and the blue leather strap is much more comfortable than the SARB017's strap.

Sadly, this model is part of a 1959 unit limited run, so the prices also shot upwards of 1000$ for pristine examples. The 1959 number is a reference to the release year of the original Alpinist model.

The SARB017 is already a classic watch that will leave its mark in watchmaking history. Unfortunately Seiko announced that it would discontinue the whole Alpinist line in february 2018. Since the SARB017 wasn't part of a limited run, you can still get new models, albeit at an inflated price.

If you get the chance to buy before it sells out, it is definitely word adding this piece to your collection. It will without a doubt keep its full value, and even gain some if you take good care of it.

Let me know in the comment section your favorite model of the Alpinist line!

About Vintage 1982 GMT – Travelling through time(zones…)